To Become A Person

“To Become A Person” is a documentary photography project that explores coming of age in indigenous rural Alaska. During this exciting time of rapid change in the personal lives of youths, there is also rapid change occurring within the landscape as climate change erodes away Alaska’s coasts and disrupts migration patterns, as well as widening cultural shifts in the age of social media and state-wide access to the Internet. Many adolescents in rural Alaska are growing up during a time when there is no running water in their hometown, but every home has a flat-screen television and Facebook that runs side-by-side with the CB radios that keep communities connected.

Many of these adolescents, the grandchildren of the boarding school generation, grapple daily with the social side effects of cultural trauma in their villages; these youths grow in places that top the nation’s rates for substance abuse, child sexual assault and sexual assault, domestic violence, and other issues, in addition to the impact of climate change. They are presented with the strength of cultural resilience while also watching their mentors live out the side effects of trauma.

Cultural hybridity is increasingly visible in the remote communities of Alaska, but the current adolescent population in Indigenous Alaska is living during a historical time of rapid changes to both technology and geography. This body of work seeks to highlight colonization’s influence on the Indigenous peoples of Alaska, explore the cultural resilience in these communities, and introduce the leaders of the next generation. 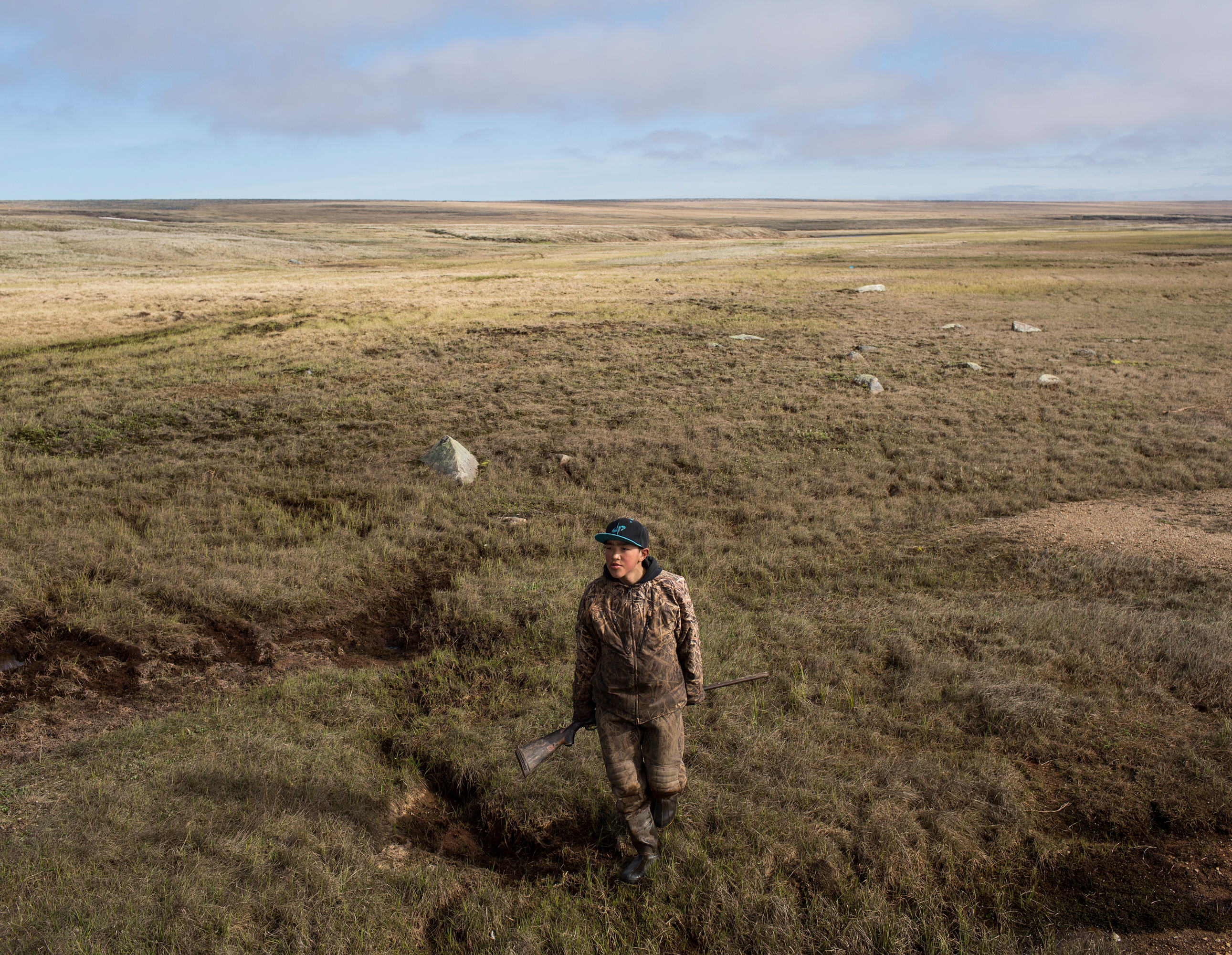 GAMBELL, ALASKA - THURSDAY, JUNE 15, 2017
Chase Apassingok, 13, hikes through the marshy fields just outside of town, looking for birds. He says his older brother, Chris, has taught him a lot about hunting.

GAMBELL, ALAKSA - THURSDAY JUNE 15, 2017
L: Merle Apassingok, Chris Apassingok's uncle and Daniel Apassinok's brother, watches his grandsons Rider, 5, and Don Don, 3, play in his home. Merle says that the word "hunter" doesn't just mean killing an animal in his native tongue, but more than that; it's a provider, he says, but more. "I wouldn't even begin to try to explain what hunting means," he says.
R: Youths, adolescents and adults play basketball in Gambell around 1:00 AM. It's normal to see games being played and people out and about during the wee hours of the morning during the summer months, when the village does not experience true night; twilight falls around 2:00AM and lingers until sunrise at 5:00AM. 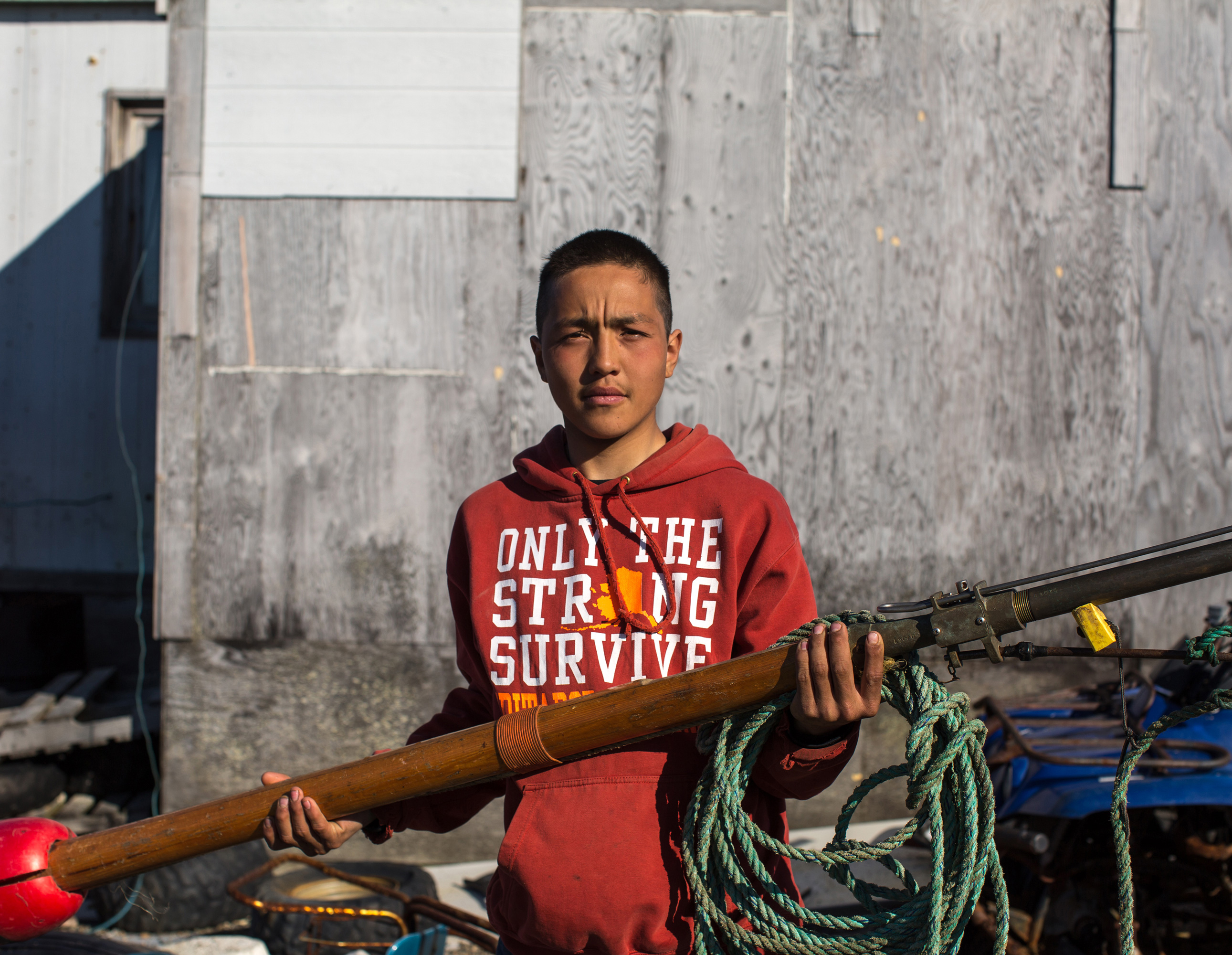 Chris was 16 when he successfully hunted a bowhead whale for his family and his community of Gambell on the remote island of St. Lawrence Island, which is one of the greatest honors for a young man in a St. Lawrence Island Yupik village. After a member in the community posted a photo of the harvest, local media published stories celebrating the hunt. Paul Watson of Sea Shepherd then took to posting to social media, calling Chris a murderer. And then Chris logged into his Facebook account and found people from all over the world sending him death threats. There is this point that you get to, villagers say, where as a kid you are trying to decide whether to accept or reject your culture, to leave your village or stay, and you are looking for identity and a sense of purpose and it's hard to navigate it all. It is worth adding that young Native men in Alaska may have the highest rate of suicide in America. Chris's family and people in whaling communities all over Alaska took to Facebook to defend Chris. Watson eventually took the post down. And now, after Chris has been recognized in many different ways in his state and community as being a cultural leader in his generation, healing has begun. 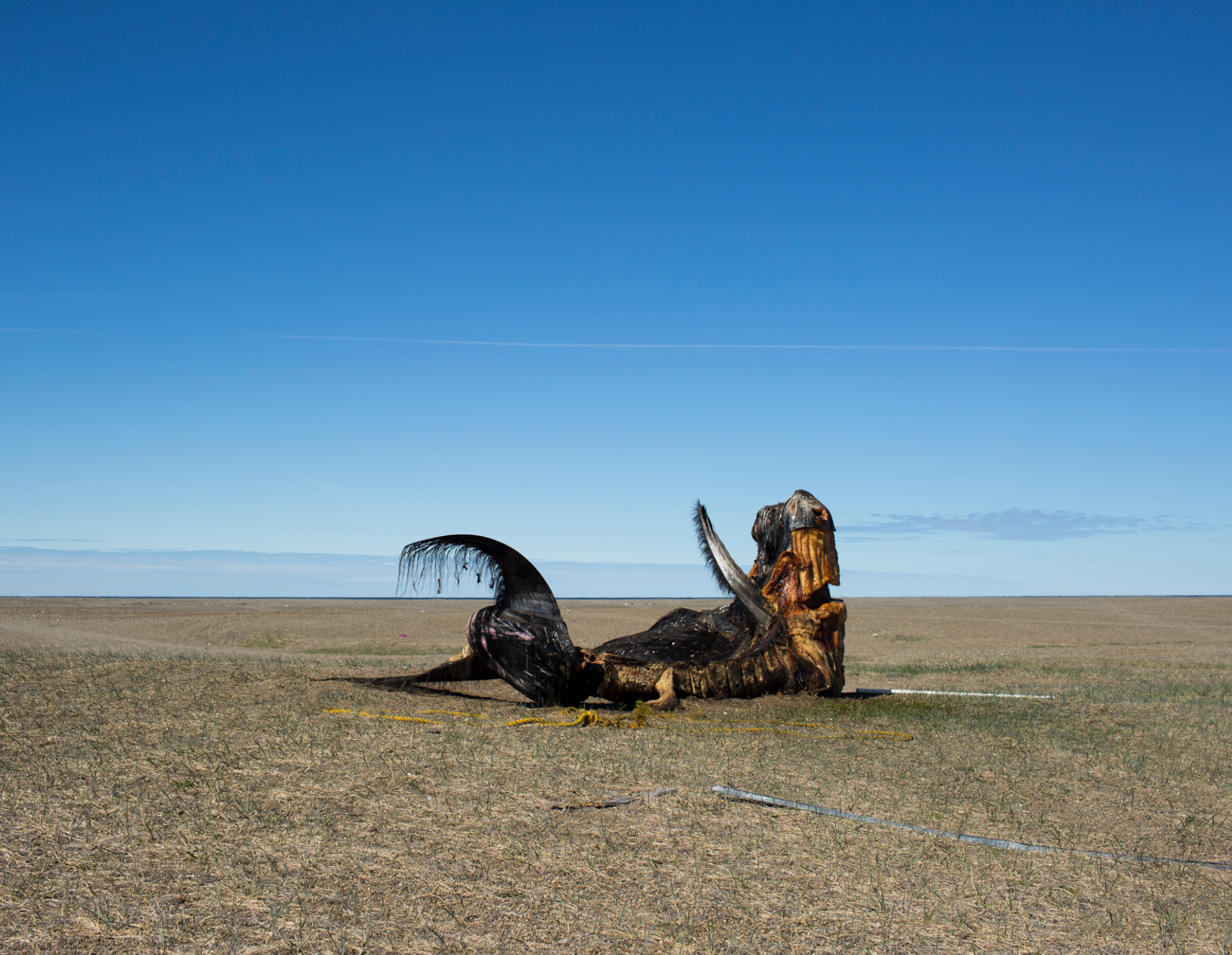 GAMBELL, ALAKSA - WEDNESDAY, JUNE 14, 2017
Part of the whale struck by Chris Apassingok with his father, the captain of his crew, in April 2017, on the lawn outside of his family home. Shares from a whale like this one are stored and also given to other members in the community and family members in other parts of Alaska. 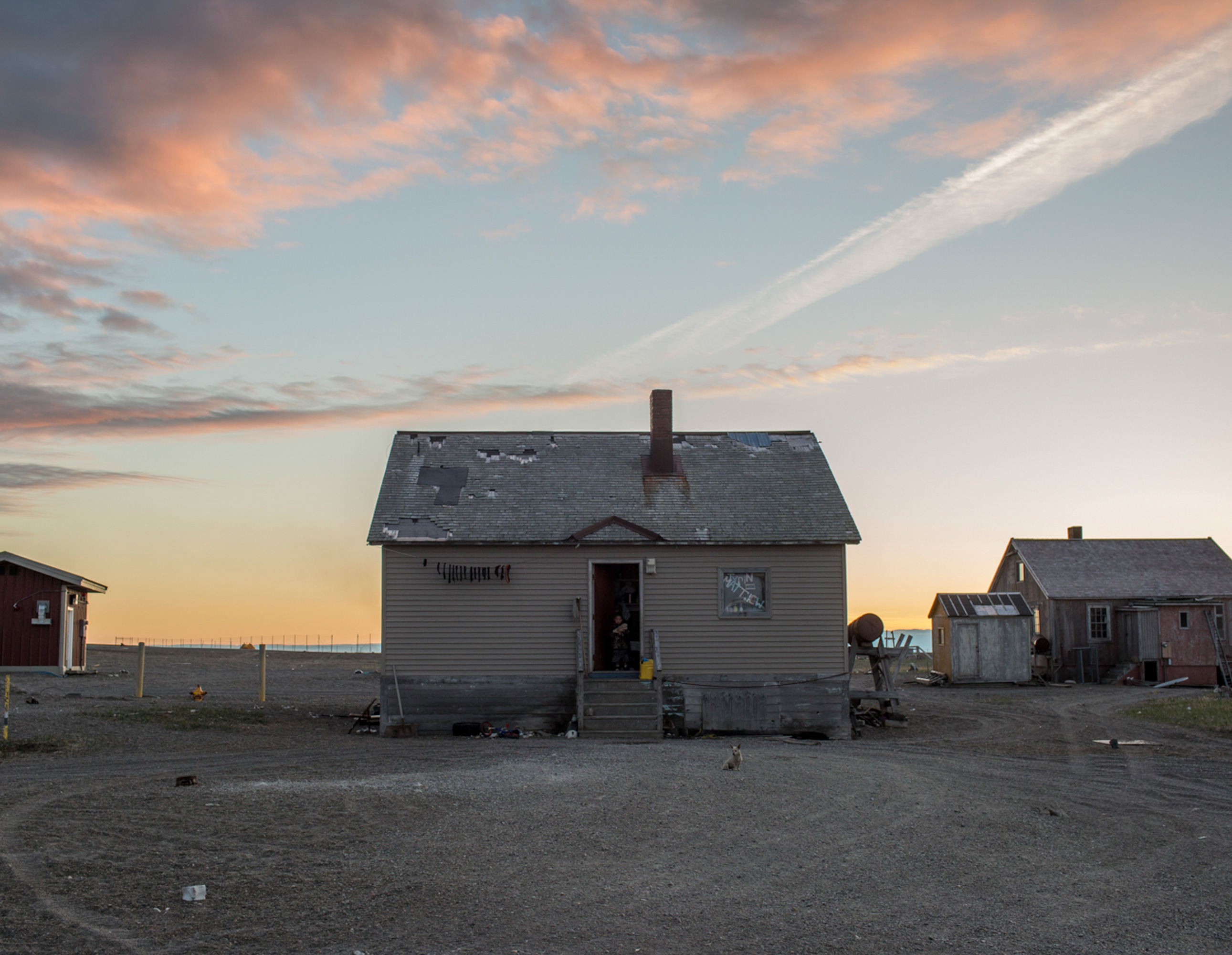 GAMBELL, ALAKSA - THURSDAY JUNE 15, 2017
A boy holds a puppy in the doorway of one of the Apassingok's neighbors late one night. It's normal to see games being played and people out and about during the wee hours of the morning during the summer months, when the village does not experience true night. Twilight falls around 2:00AM and lingers until sunrise at 5:00AM. 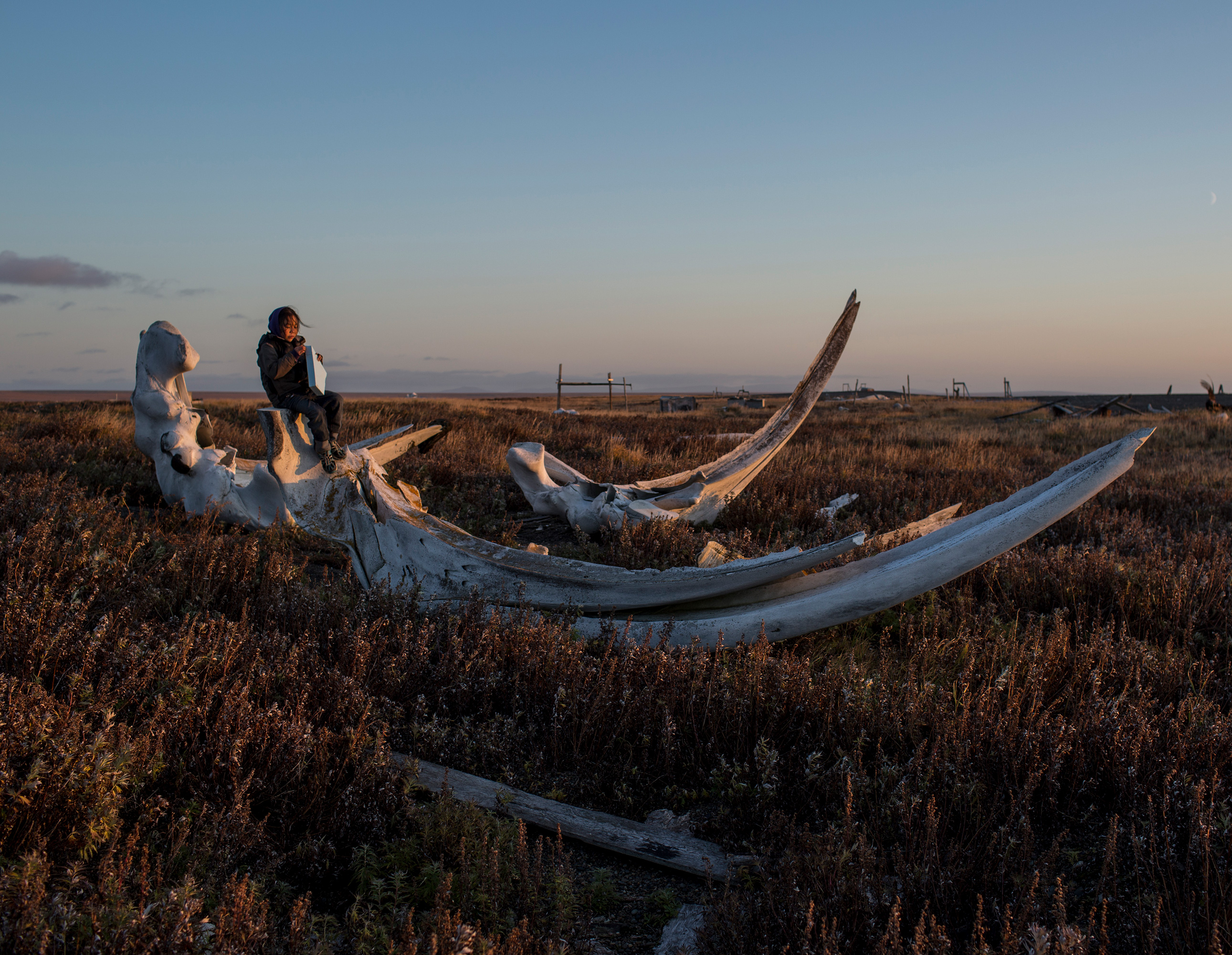 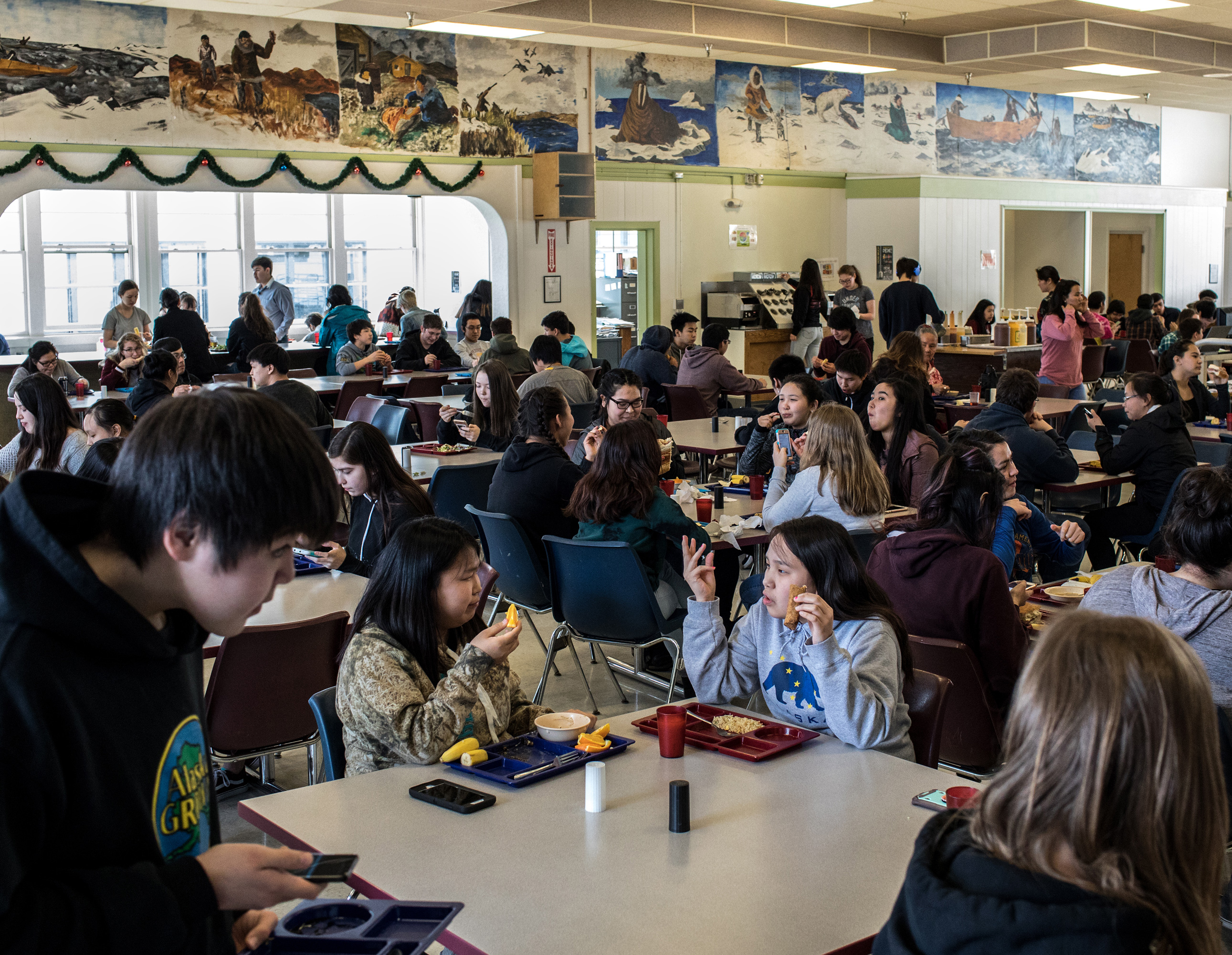 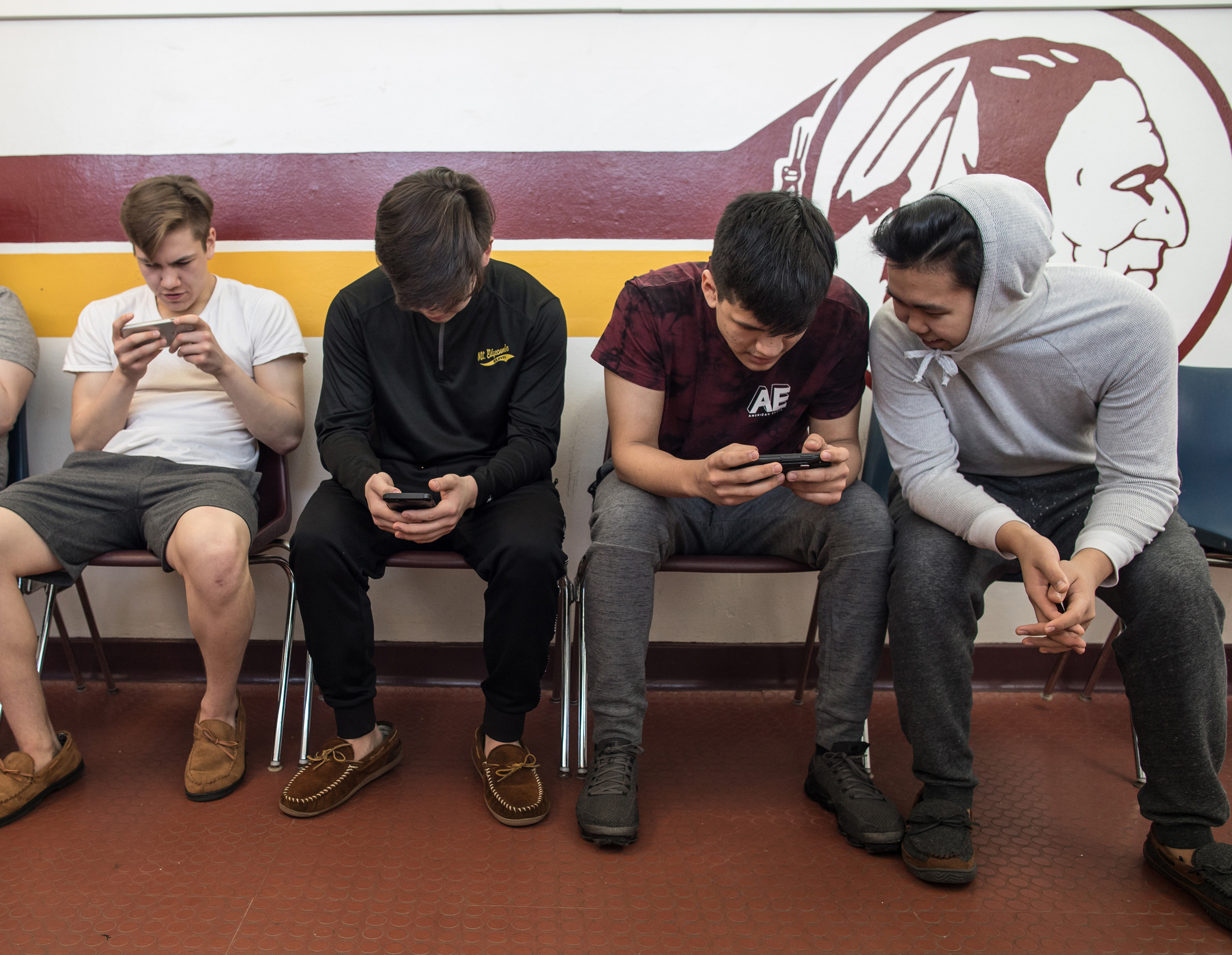 SITKA, ALASKA – SATURDAY, APRIL 7, 2018
Boys hang out in a hallway of Mount Edgecumbe High School in front of the school’s mascot, the bust of the Brave. A small, mostly secret group of alumni have begun to address the Brave as an offensive symbol, but most students and alumni herald it as a proud part of tradition. 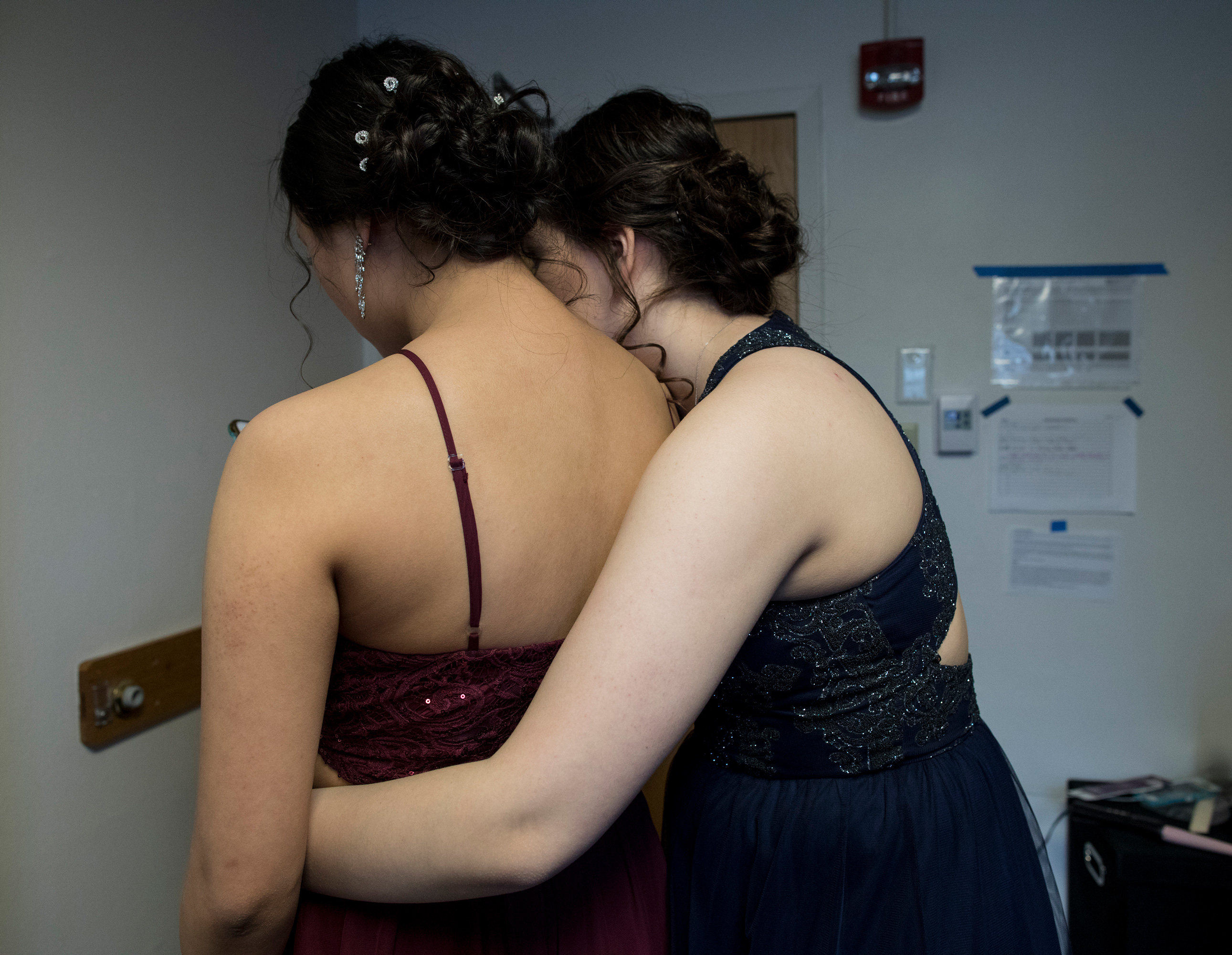 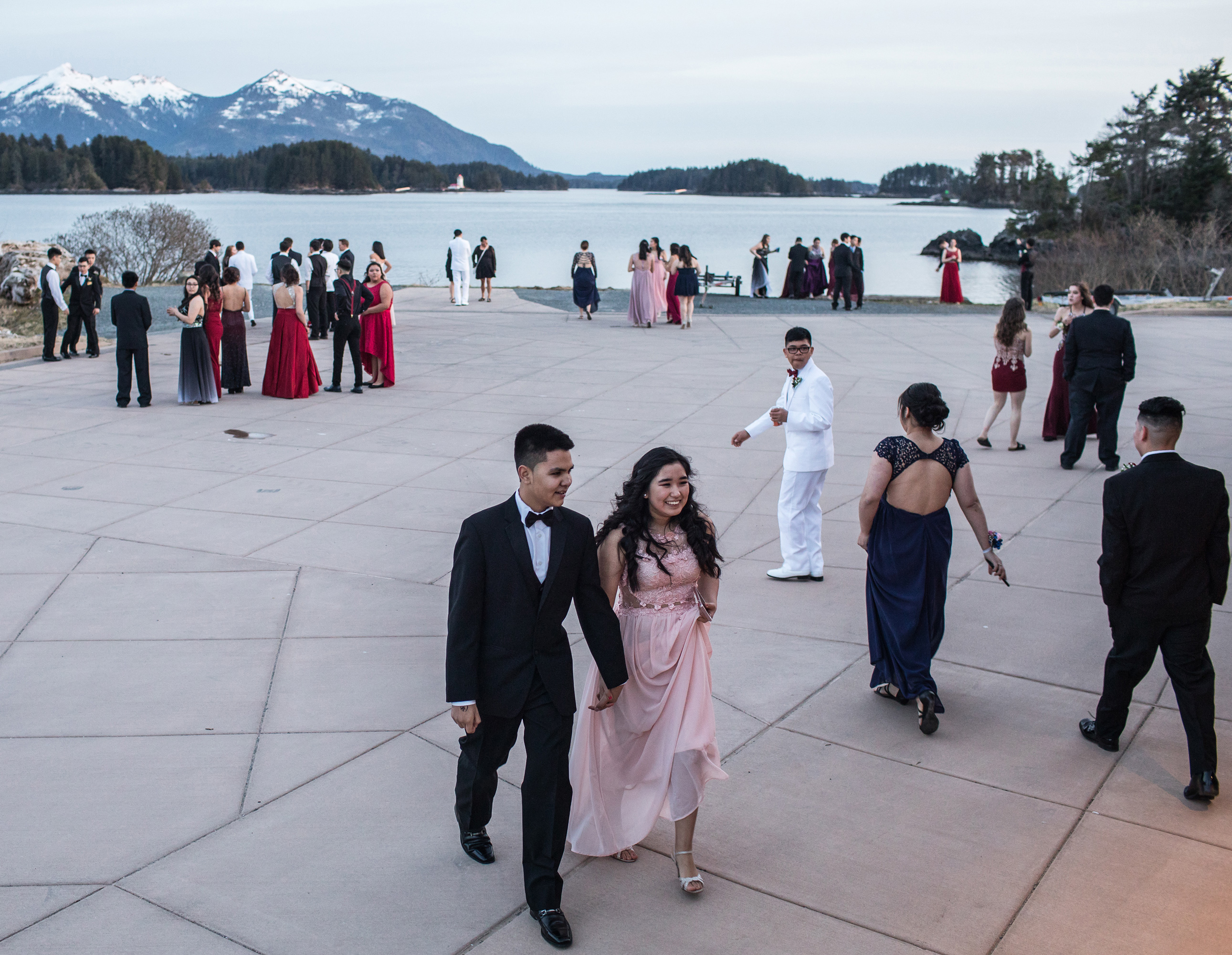 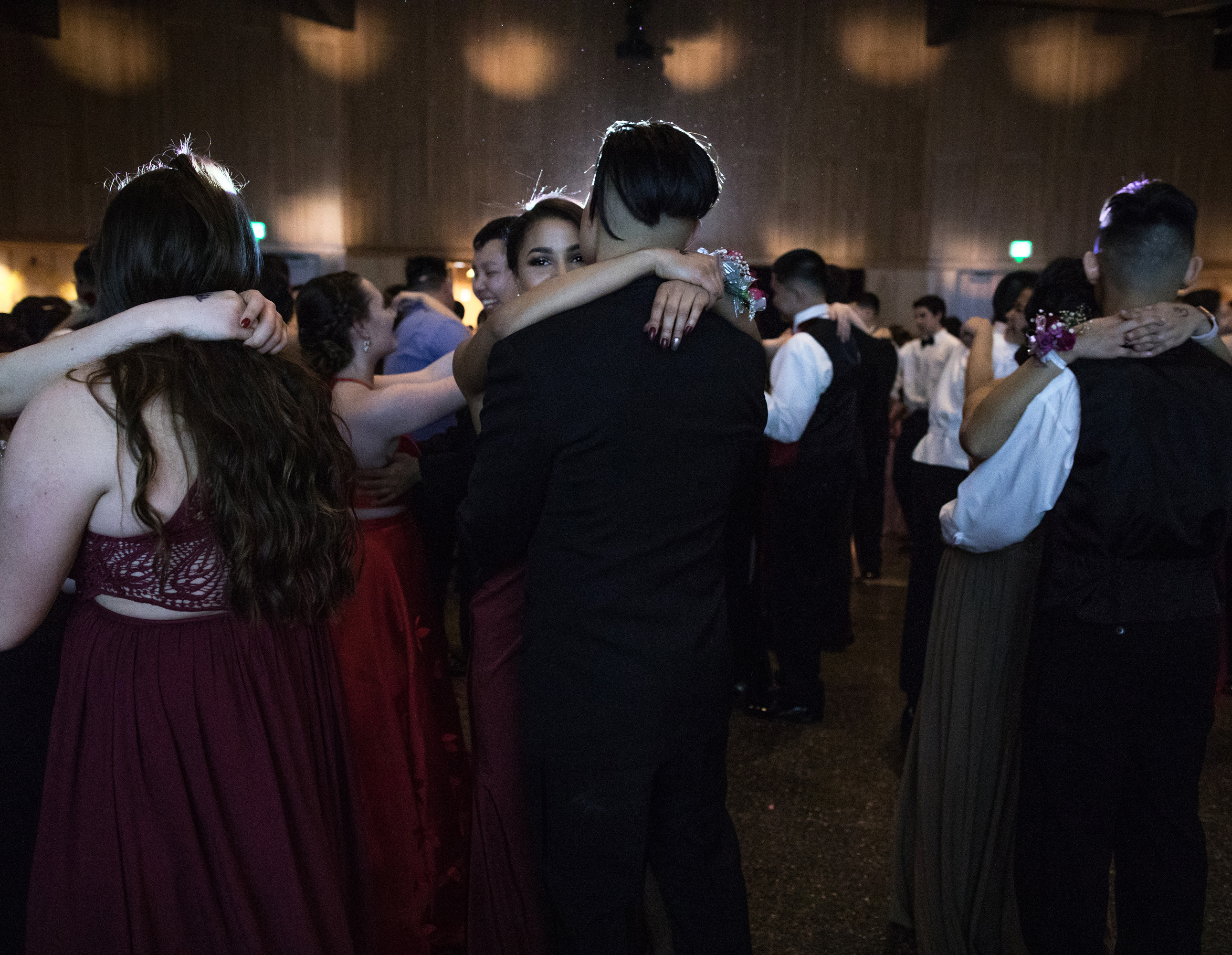 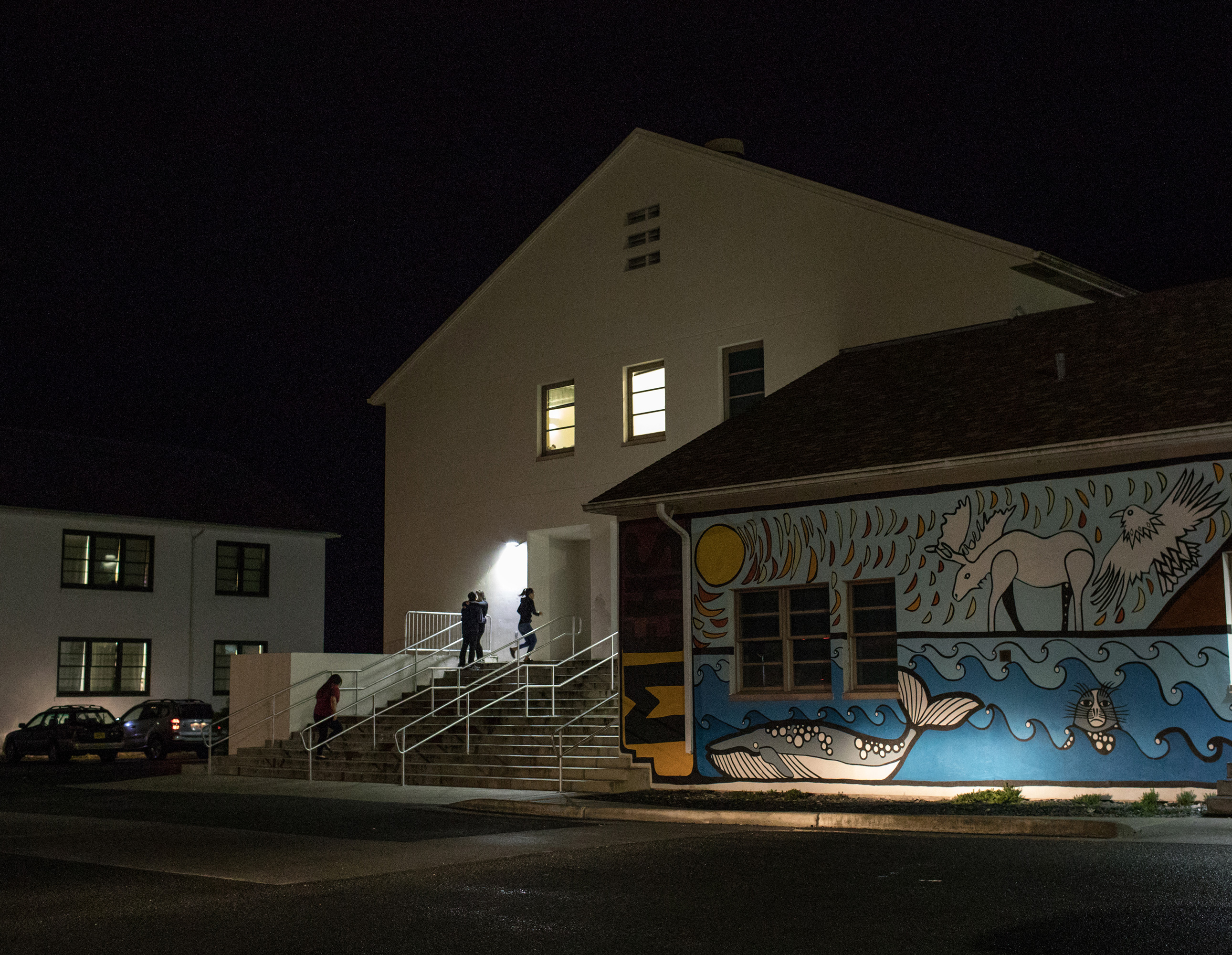 SITKA, ALASKA - SUNDAY, APRIL 8, 2018
Students hug on the steps of one of the dormitories at Mount Edgecumbe High School. 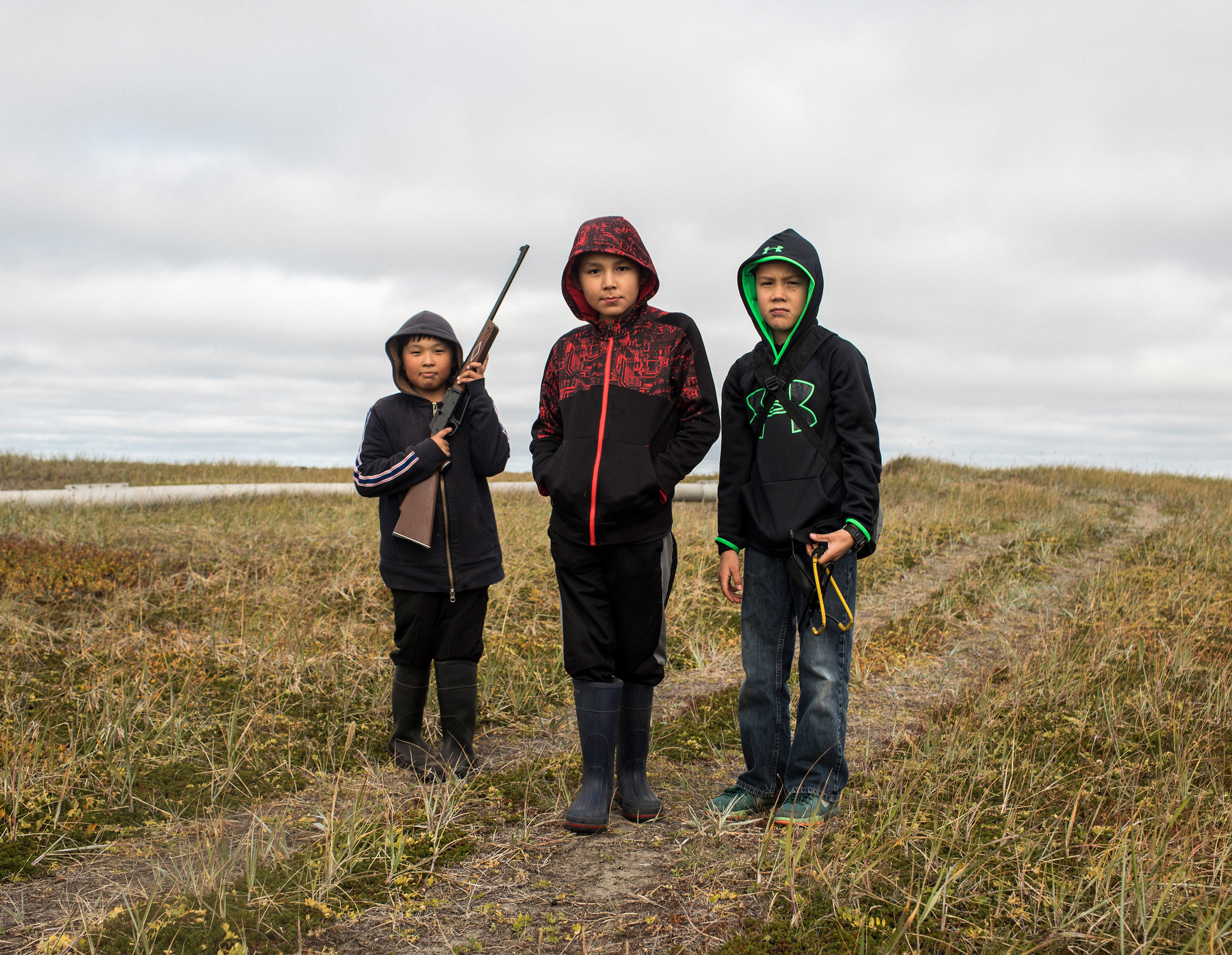 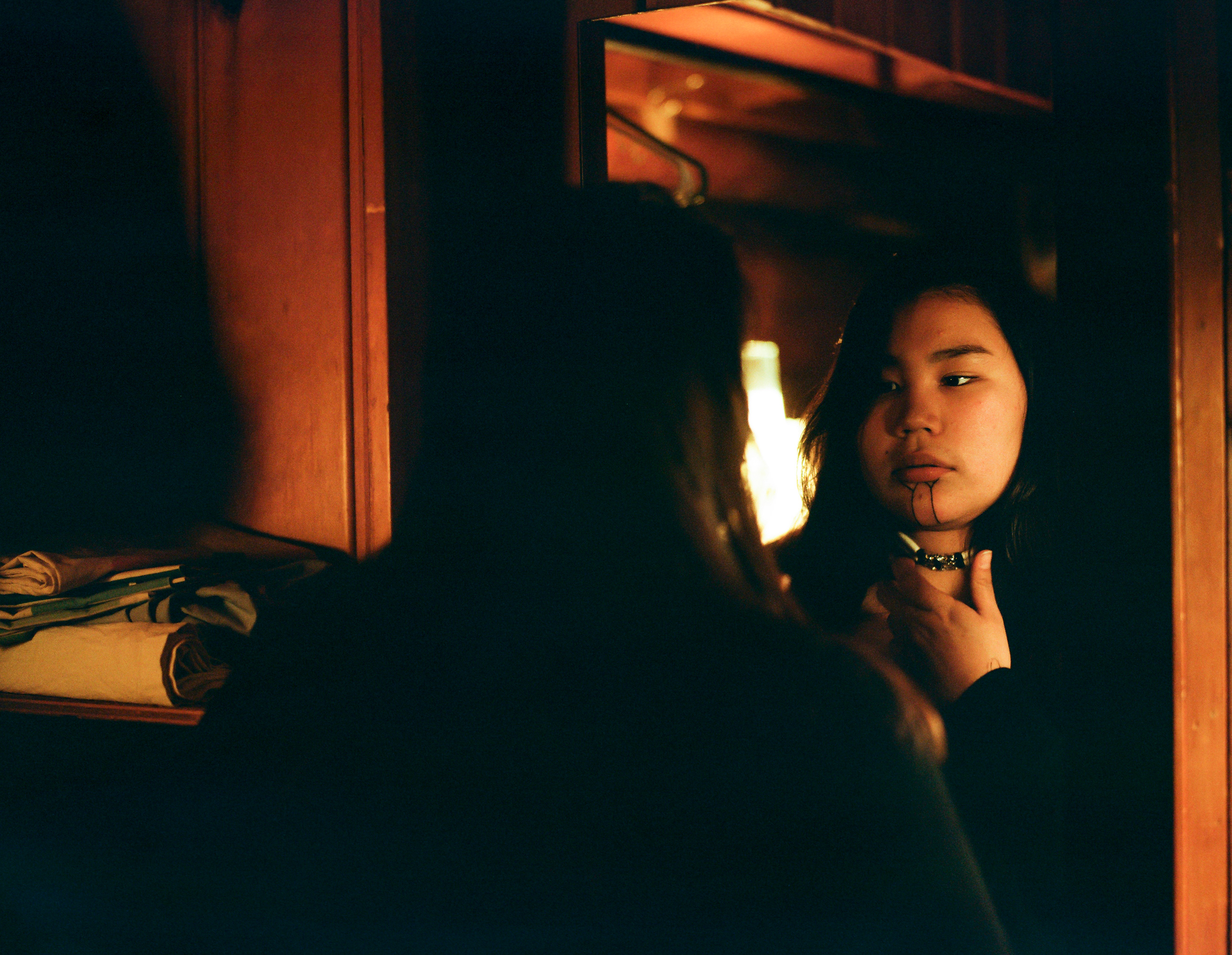 FAIRBANKS, ALASKA - Saturday, March 3, 2018
Jerrilyn Wellert, 18, looks at her finished tattoo. Wellert, who is mother to a four-year-old son, said that she wanted to get it to show that she is proud of being Inupiaq. She says that she has carried shame over not having fluency in her language even though she grew up in a village, and that this represents a commitment to teach her son to have pride in his cultural heritage. Face tattooing is part of several movements to revitalize traditional practices that were threatened by colonizers.

KIVALINA, ALASKA - October 3, 2015
L: Jared Norton butchers a caribou with the help of a few adolescents. Subsistence hunting is a common cultural practice in Kivalina; caribou, seal, and walrus are all staples. Kivalina is one of several Alaska Native villages experiencing effects of climate change that make the village’s current location unsustainable. Scientists estimate that the 400-person Arctic village that is only accessible by boat or plane has a decade or less before it will be uninhabitable, as the permafrost is melting and storms and the sea eat away at its coastline. The village is currently in the process of building its new site, about 8 miles away. Already, the village has experienced serious changes to food supplies as a result of the Arctic's rapid warming. It is difficult to hunt for whale due to changes in the ice, and tomcod runs have been inconsistent. The ice is freezing later in the year and breaking up earlier.
R: A bicycle and caribou hide in Kivalina, Alaska. 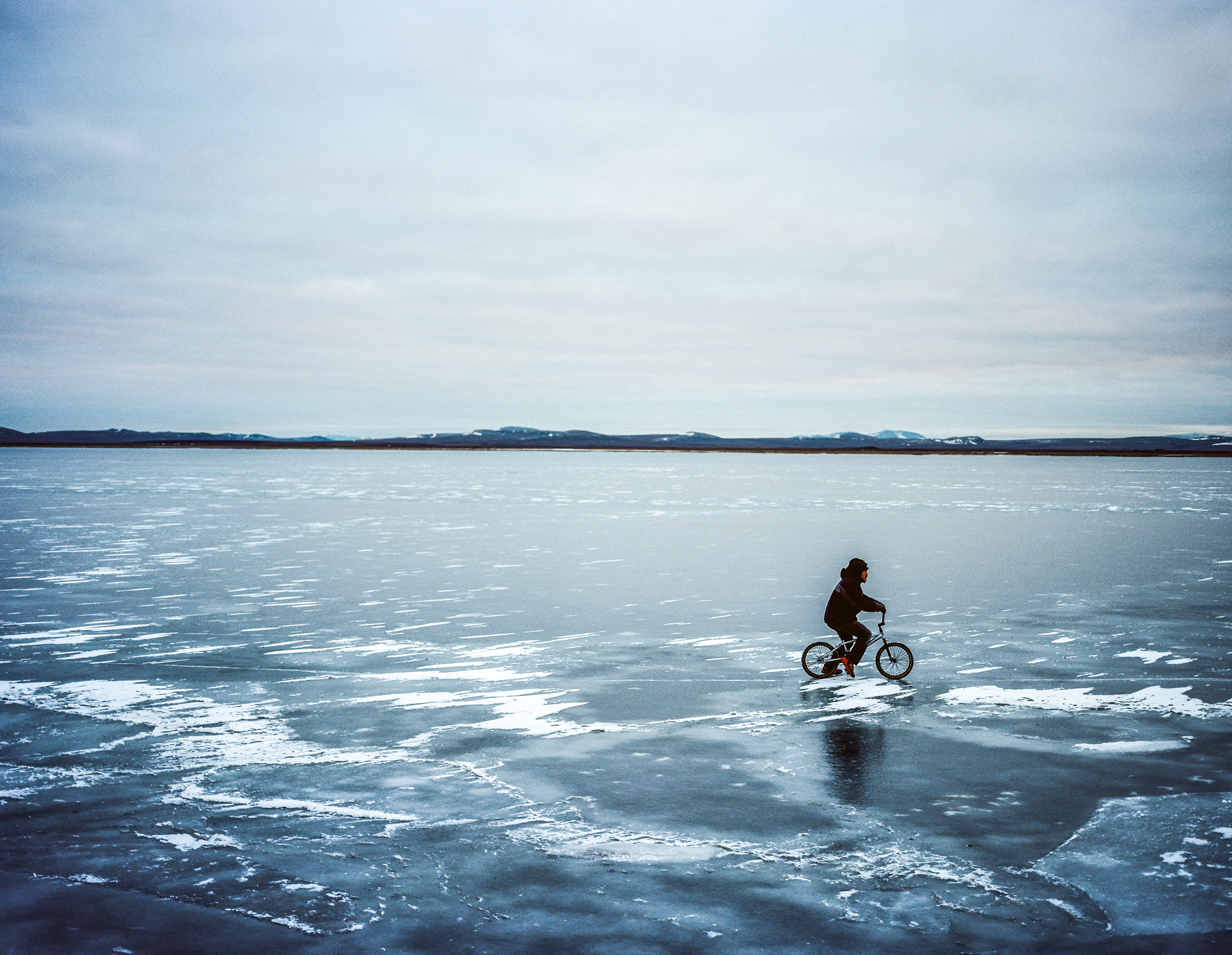 KIVALINA, ALASKA - November 5, 2016
Jared Norton rides his bike across the lagoon in Kivalina, Alaska. Late in the year, this is the first weekend that the ice has been frozen.

KIVALINA, ALASKA - APRIL 15, 2017
L: Sakkan holds two ptarmigan wings inside the cabin on a day that was too windy to go out whaling. A couple of nights before, his father, whaling captain Reppi Swan, had killed several ptarmigan which the crew then fried them for dinner. They kept the wings to use as brooms to sweep out the cabin.
KIVALINA, ALASKA - NOVEMBER 2016
R: Four-wheel tracks on the beach.
‍ 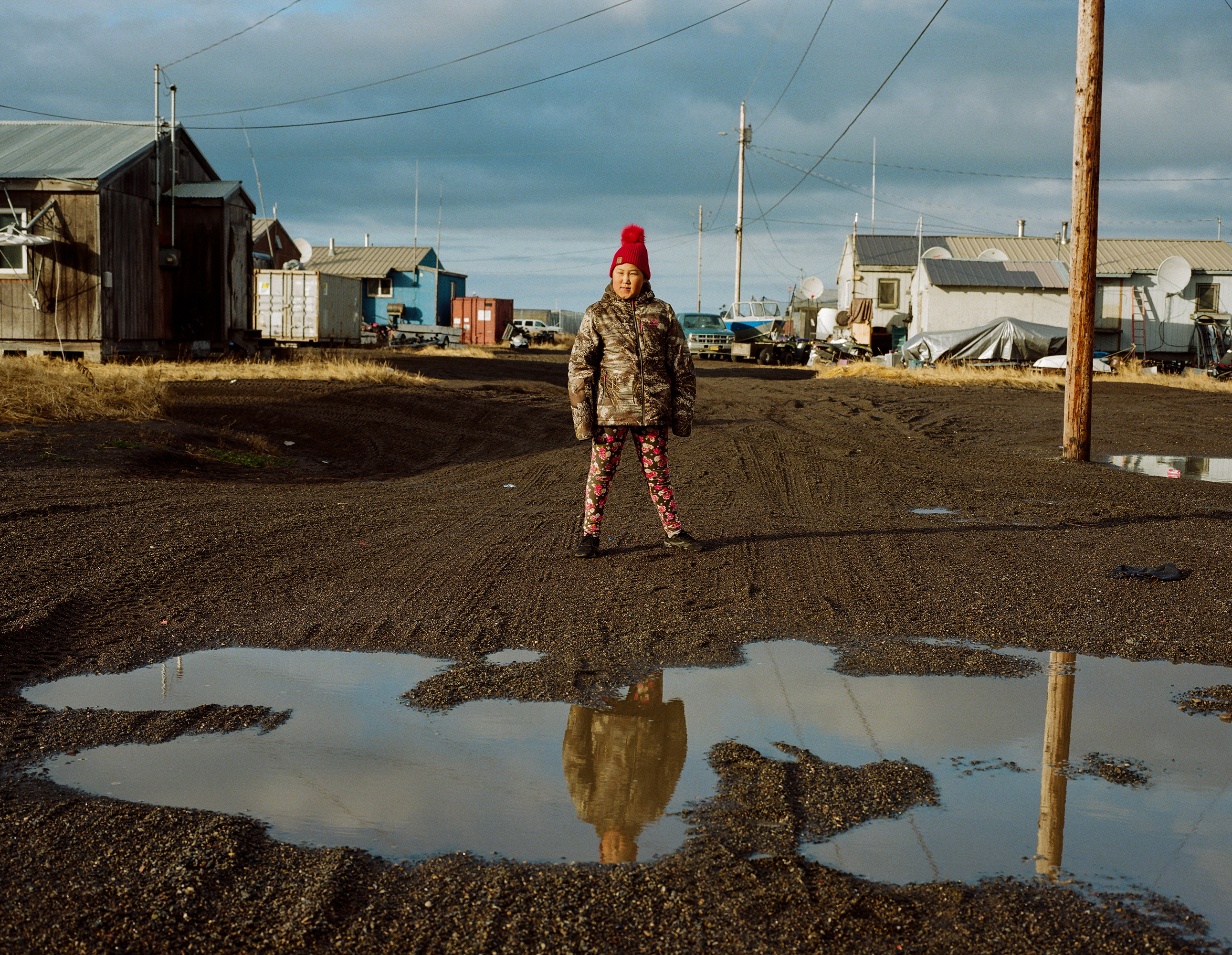 KIVALINA, ALASKA - November 2016
L: Isabelle Booth holds her 2-month-old grandson, Ezekiel Mark, in her home.
R: A wall in Lucy Adams's home in Kivalina, Alaska. Families in Kivalina stay connected with CB radios, like the one shown here. In most homes, the hum of voices on the radio is an almost constant backdrop. 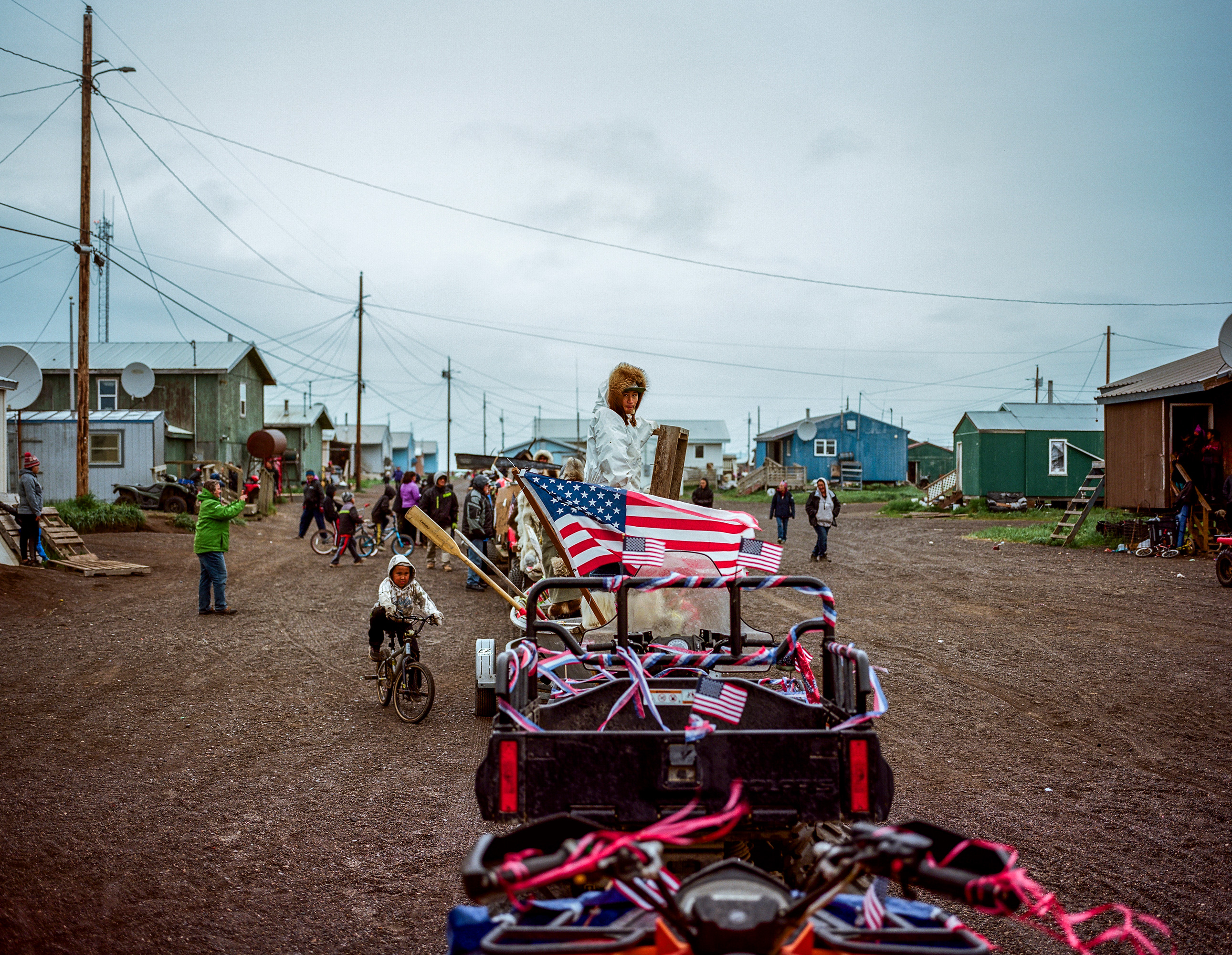 KIVALINA, ALASKA - July 4, 2017
The community of Kivalina, Alaska, participates in the Honda Float Parade on the Fourth of July. Kivalina is a village of about 400 people roughly 83 miles above the Arctic Circle. The village is not accessible by road, and so during the summer months, the primary mode of transit is four-wheelers and boat, and in the winter, snow machines. 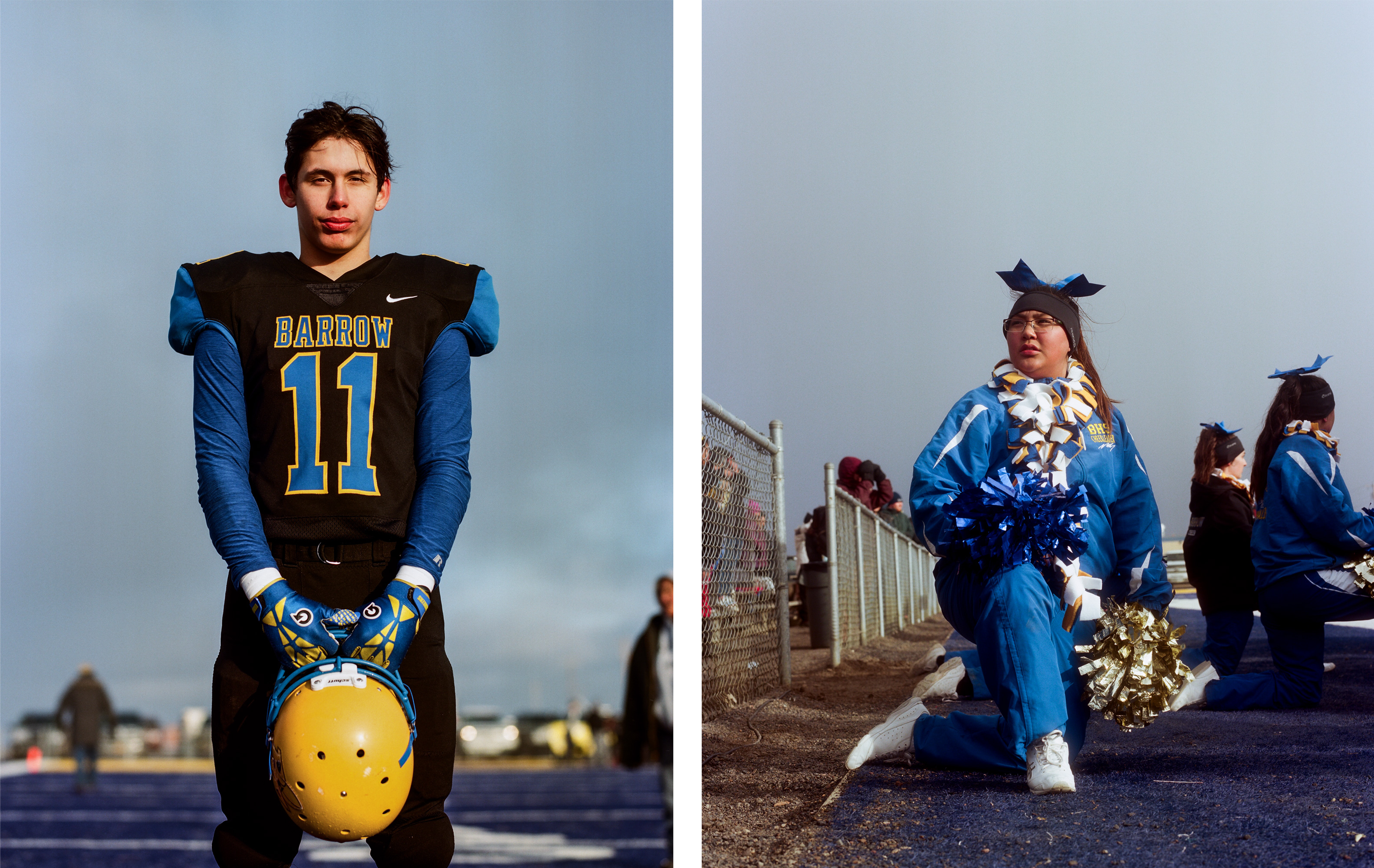 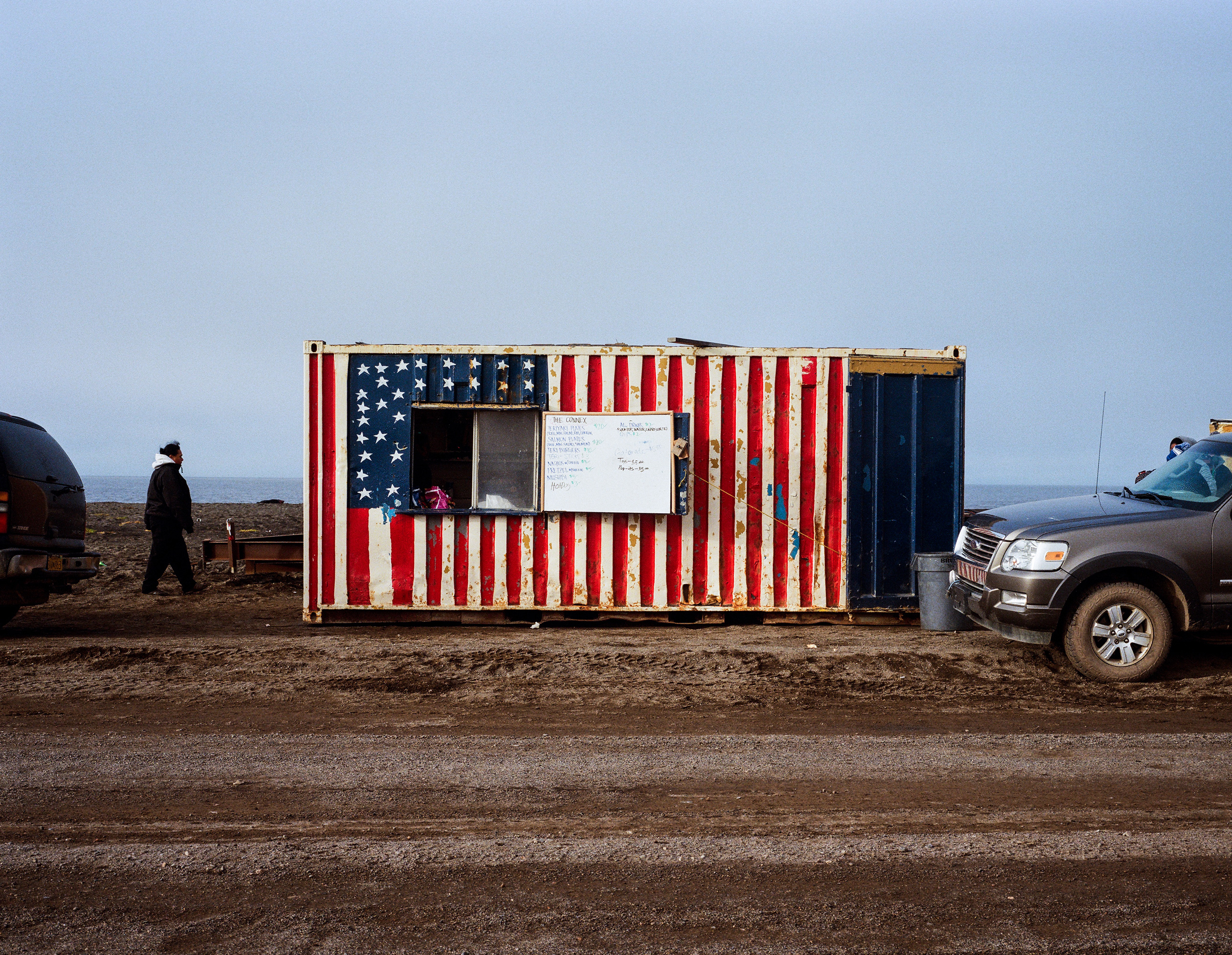 UTQIAGVIK, ALASKA - Saturday, September 23, 2017
The concession stand near the Barrow Whaler’s field, the northernmost football field in the United States.

NEWTOK, ALASKA - Friday, October 26, 2018
L: The doors to the Newtok school. Newtok is one of several Alaska Native villages that needs to relocate due to coastal erosion caused by climate change. The village has been in the active process of moving to the new location, Metarvik, since 2019, but discussions of the move and the slow planning and building of infrastructure began over a decade ago.
R: Handprint in the freezer after NYO (Native Youth Olympics) practice in the gym at the school in Newtok, Alaska. 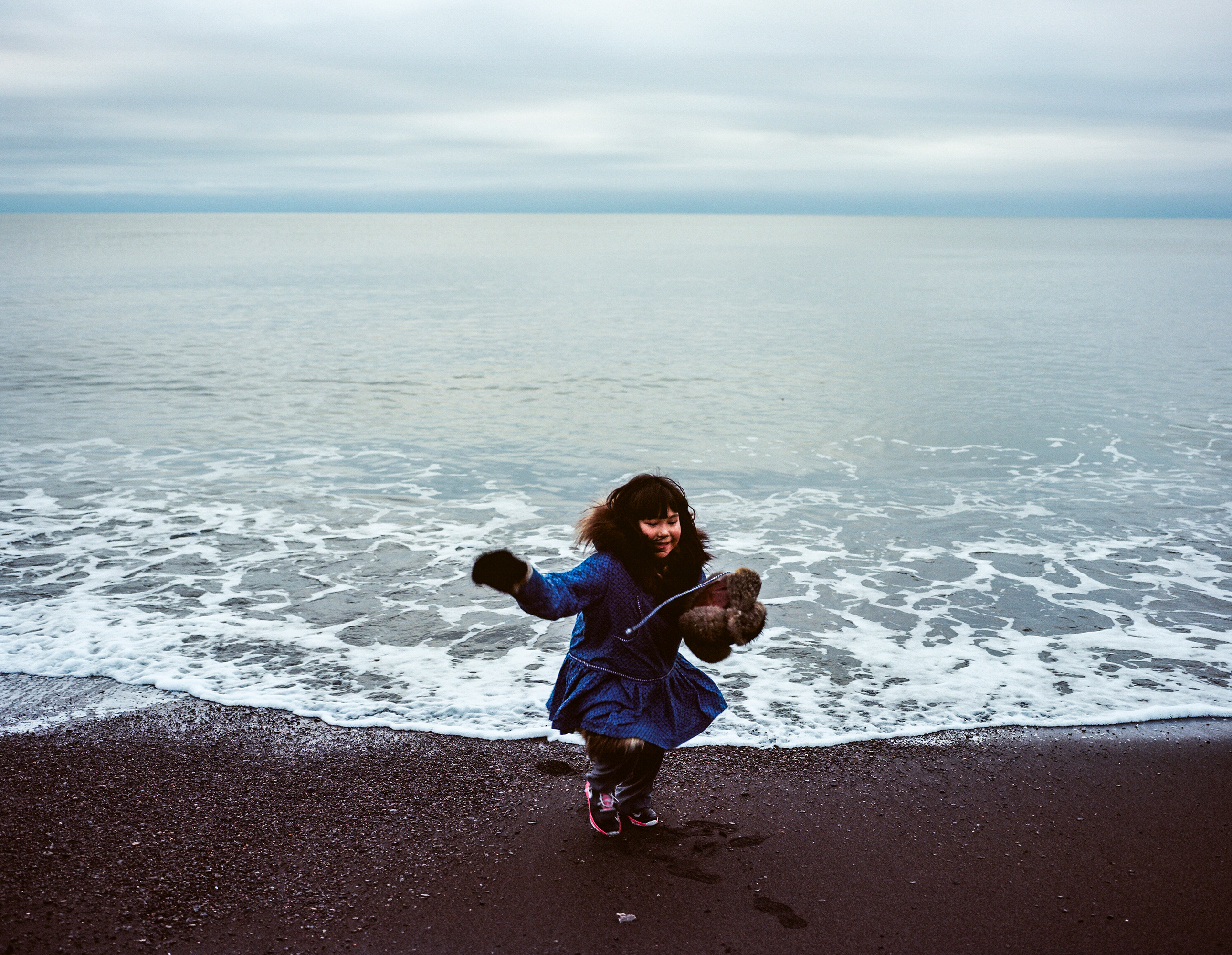 KIVALINA, ALASKA - NOVEMBER 2016
Jennifer Swan runs from the waves of the Chukchi Sea on the beach in Kivalina, Alaska. The roughly 400 person village of Kivalina is one of several Alaska Native villages that faces necessary relocation in the next few years, due to rising sea levels and eroding coasts. The village is currently in the process of building a road to a safer location about 8 miles away.